Back | Go to board 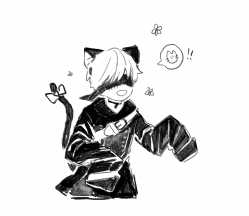 /cm/ is for 2D male work-safe images. Images should depict animated males and be cute in nature.

1. Check the catalog before creating a thread to avoid duplicate threads.
2. Please post 5 to 6 images to get new threads started.
3. This board is for animated content only. Do not post images depicting "real" people.
4. Images of heterosexual couples belong on >>>/c/
5. Pornographic homosexual or solo male content belongs on >>>/y/

Now that the almanac and all episodes are out, Season 1 is officially over. What's your favorite episode? Have any hopes for Season 2? Previous thread >>3518232

1) Be polite to the drawfriends - they're drawing for you, after all.

2) Specifics, details and references pics are always appreciated, and increase the likelihood of your request being fulfilled.

3) Don't expect your request to be done straight away, or even at all - not every request is going to get done. If you think it's been overlooked, wait a while and relink or repost it.

5) No nsfw requests. Stuff like that belongs in >>>/y/drawthread

6) Please limit image posting to references and request fills. We don't need a bunch of reaction pictures and such killing the thread early.

I love this guy so much. One of the best cartoon husbandos ever.

Are there cute boys you've always wanted to post, but never had the chance to? Boys who aren't popular enough or don't have enough fanart to warrant a thread? Well, this thread's just for them!

We've had a Gyro thread and a Diego thread, it's time for a more inclusive thread that allows best boy. All Part 7 boys/ships welcome, though bonus points for Johnny.


It's been 15 years since Kingdom Hearts II came out.

Continued from >>3515157
Who knows what bizarre new information will come about next?

My husband Minato is so cute

Just beat the game. Give me cute Shinobi and Samurai art.

post cute FPA and galactic empire boys, i need more of them

First episode of the Kemono Jihen came out today. Hopefully the anime leads to an explosion in fanart!

It’s been a while.

And the fandom it’s quite coming alive again.

You know what to do.

or anything vaguely medical related

I can't be the only one into this

The old Astolfo thread is at image limit, so it is time for another.

Guys with guns and other weaponry

A thread for the intersection of sports and cute boys.
Anything related is welcome.

I need more of these bois

There's a thread for handsome/masculine looking girls over on /c/ so I thought why not a thread for pretty feminine boys here?

Been a while since I've seen a thread for this. Share your cute bound boys.

a boy who made this shitty year not so shitty

A second installment by popular demand.
Post your favorite mercs!

Let's enjoy the road to S2 and celebrate the best boys.

>no dorohedoro thread
this board needs more cute buff men

This board needs more 9S

Sci-Fi Shota Thread.
Also, can anyone ID the artist that made these? I want to see if there's more.

Idk why, but I find crying grown men in anime and manga to be adorable.

Been a while since we had one of these

let's have a thread for the best ronpa boy, Nagito Komaeda!

I see lots of other JoJo characters but what do you guys think of Narancia?

Anyone own /cm/ figures? Do your friends/family realize how gay they are?

Post any relevant figures you own, girls seem to get all the love on this end.

Last ep of ss1 will come out this weekend. Let's have a thread for the purest love ever told.

Together or apart, images of Prince Sidon and BotW Link.

I love him so much its unreal

Boys with food, cooking, eating, in the kitchen, etc...

no, not that spammer

Can we have a thread for Connor?

I see a Deku and an Endeavor thread, so I'd like to make a My Hero Academia thread for the League of Villains in honor of the last two bombshell chapters and this killer arc.
Hawks is an honorary member.

Post what you consider to be perfect examples of male beauty.

Posting cute jotaro pics just because he is so fucking cute.
3taro is my fav

This show has some excellent cute boys, IMO.

Mikorins are always appreciated but bonus points for the other boys, especially rare Nozaki art that doesn't include Sakura.

Come on now who's got the good stuff

I'm a massive slowpoke who recently finished this beautiful series and now I'm in need of some cute art.

Human or wolf form, doesn't matter to me, I love this boy and need more of him.

I didn't know this was a thing until today

How About A Kiss From Your Brother Edition

Are you hyped for The Lost Chord? What are your expectations? Previous thread >>3515096

Let's get some rural flaire in here!

I love the twisted wonderland game and I have several favorite characters they are riddle and malleus and they are soooooo cuteeeeee
P: 0 other user on this page